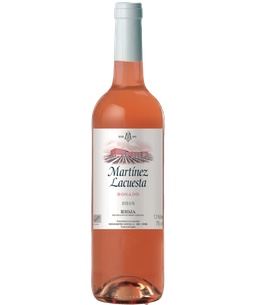 Bodega Martínez Lacuesta was founded in 1895 in Haro by Félix Martínez Lacuesta – Winemaker, Politician, and Promoter. He was the first president of the National Society of Wine Growers and Wine Producers, and president of the Rioja Wine Union. Also, he represented bodega owners in the establishment of the Rioja D.O. appellation. Along with his brothers Alfonso, Julio, José María, José Crescencio, and Emiliano they formed the beginnings the modern Bodegas Martínez Lacuesta. Today, the bodega remains a family business. It is one of the Hundred-Year-Old Rioja Bodegas.

The Bodega’s vineyards are located in Haro (Rioja Alta), on the right bank of the River Ebro. The vines are at an altitude of 400-500 meters above sea level, and the main grape varieties that are raised are Tempranillo, Garnacha (Grenache), and Mazuelo (Carignan).

A lively rose made of Grenache. Fruity aromas on the nose. Fresh in the mouth with good acidity. Perfect to accompany pasta, rice dishes, vegetables, and even omelets.

The wine is made using traditional methods. Destemming of grapes. Short maceration to extract the minimum color with fermentation in stainless steel tanks.