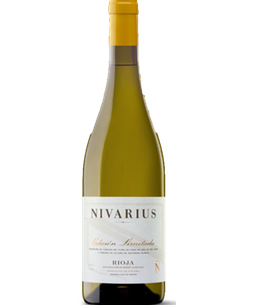 Bodega Nivarius is a unique winery in Rioja because it exclusively produces white wines from native varieties such as White Maturana, Viura, and Garnacha Blanca. The winery and vineyards are at elevations of 800 meters, with north-facing vineyards influenced by an Atlantic climate. These conditions create impeccable white wines that express the character and genuine personality of the region’s local white varieties, such as White Maturana. The estate uses honest farming practices with little intervention to respect the biodiversity of the environment, resulting in the most genuine expression of the land and the wines. Nivarius is a Latin term for a natural well where the snow was stored all year round.

From selected vineyards in Las Laderas del Moncalvillo, Alto Najerilla, and Nalda. The Viura vines are over 80 years old and are planted between 500 and 600 meters above sea level. The White Maturana vineyards are planted at 800 meters above sea level. The soils are mainly calcareous clay with a small percentage of ferrous clay and deep soils with sandy sedimentation components. This soil mixture gives the wine structure, freshness, and longevity.

Straw-yellow color, with a yellow rim. Good intensity on the nose, hints of baked apple and pears, accompanied by a hint of nuts and a subtle mineral reminiscence. Fresh, rounded, and balanced on the palate with ample texture and a long finish with jam-like fruits and nuts

Manual harvest in boxes of 18 kg, each variety individually. Whole cluster light pressing in the absence of oxygen at a low temperature. Fermentation in French oak barrels. Subsequent aging on the fine lees for 9 months in French oak barrels with lees stirring 3 times per week to give the wine a broad texture.