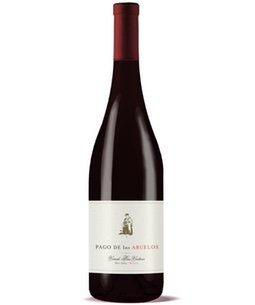 Pago de los Abuelos is the personal project of renowned winemaker Nacho Alverez. With a deep love for the land that he inherited from his grandparents, Nacho is committed to preserving the work of his ancestors - his superheroes “les abuelos.” The 6-hectare estate, based in Spain’s Bierzo’s wine region, is planted to the indigenous varietals Estaladiña, Godello, Grencache, Mencia, and Palomino. Nacho’s grandparents, Floripes and Guillermo, first planted the Barreiros vineyard in 1890. In 2015 Nacho took over the vineyard. It took him two years to restore the vineyards by terracing the land, as well as pruning and replanting some of the original Godello and Mencia vines. Nacho’s first vintage from this property was 2018.

This Mencia comes from the Peña vineyard, which consists of 8 different plots totaling 2.5 hectares, was planted in 1904 by Nacho’s ancestor Santiago. With a south-southwest orientation, the vines sit in limestone soils and take advantage of Mediterranean influences. Cultivated and harvested by hand, practicing dry farming with no irrigation. No pesticides or herbicides are used.

A Mencia with great character that comes from vineyards planted in 1904. The cherry red color is appealing to the eye. On the palate, it brims with red and blue fruits and toasty notes that feel light, but opulent thanks to the limestone soils. It has subtle tannins with an enjoyable finish. Start enjoying now, but will be good over the next 6 years.